» All Our Books » The Monsters: Mary Shelley and the Curse of Frankenstein 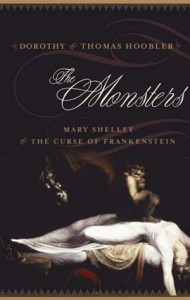 The Monsters: Mary Shelley and the Curse of Frankenstein

From The Monsters: Mary Shelley and the Curse of Frankenstein

The conversation at the villa continued long into the night, “and even the witching hour had gone by, before we retired to rest,” wrote Mary. But late as it was, she could not sleep. She returned to that world between consciousness and dreams where only she could enter. “My imagination, unbidden, possessed and guided me, gifting the successive images that arose in my mind with a vividness far beyond the usual bounds of reverie.” Though the room was pitch black, she closed her eyes tightly. That did not shut out her “mental vision.” She saw a man, whose name she did not yet know, a “pale student of unhallowed arts kneeling beside the thing he had put together. I saw the hideous phantasm of a man stretched out, and then, on the working of some powerful engine, show signs of life, and stir with an uneasy, half vital motion.” It lived.

In Mary’s vision, the “artist” responsible for this creation was terrified by “his odious handywork.” He fled, hoping that the process he had set in motion would cease by itself, that “the slight spark of life which he had communicated would fade….that the silence of the grave would quench for ever the transient existence of the hideous corpse.” Like Mary, the creator of the monster went to bed. He slept, “but he is awakened; he opens his eyes; behold the horrid thing stands at his bedside, opening his curtains, and looking on him with yellow, watery, but speculative eyes.”

Just the thought of it startled her into wakefulness and as she opened her own eyes, terror-stricken, Mary half expected to find the monstrous creature standing over her. She looked around the darkened room where she slept, trying to fasten on something real. “I wished to exchange the ghastly image of my fancy for the realities around,” she recalled fifteen years later. “I see them still; the very room, the dark parquet, the closed shutters, with the moonlight struggling through, and the sense I had that the glassy lake and white high Alps were beyond.” But the “hideous phantom” would not leave her mind. She tried to think of something else…”my tiresome unlucky ghost story! O! if I could only contrive one which would frighten my reader as I myself had been frightened that night.”

Then she realized what had happened: “I have found it!” she exclaimed to the darkness.