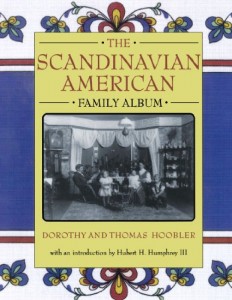 Irja Laaksonen arrived in the United States from Finland in 1907, when she was four years old. Her father, who had emigrated earlier, was reunited with his family in Fitchburg, Massachusetts, as Irja recalled.

“It was a beaming Papa who met our train when we finally arrived in Fitchburg. Finnish people usually do not approve of kissing and hugging in public. But when Papa saw Mama, he squeezed her so tightly that all she could do was laugh and say, ‘No, no, no!’ Then Papa shook hands with my brothers and lifted up me and my little sister for a big kiss…

“Papa rented an apartment for us in a building next door to the Finnish Hall. Then he bought some furniture on the installment plan. How well I remember that furniture! There was a rocker, a chair, and a sofa colored with green and black velvet flowers. The rug was tan with great big pink roses. When my brother Ilmari saw the furniture for the first time, he jumped up and down and shouted, ‘We’re rich now! We’re rich now!’ Papa must have been very amused, knowing that the furniture was still a long way from being paid for.”